The opening clip in Act I is a modified compilation of 3 animations that combines URENCO’s virtual tour called Xperience. For my purposes, I just needed the first 2 stages–but I highly recommend taking the tour at http://www.urenco.com/custom/459/virtualtour/default.aspx 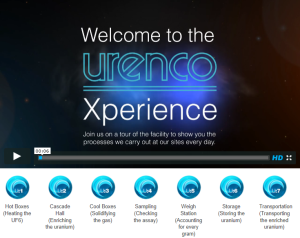 URENCO was established in 1971 following the entering into force of the Treaty of Almelo signed by the governments of Germany, the Netherlands and the United Kingdom and was incorporated as an English private limited liability company on 31 August 1971. The Treaty of Almelo establishes the fundamental principles for effective supervision of URENCO’s technology, centrifuge manufacturing and URENCO’s enrichment operations. A committee comprising representatives of the governments of the signatory countries (the ‘Joint Committee’), exercises this role but has no role in the day-to-day operations of URENCO.

The Joint Committee considers all questions concerning the safeguards system (as established by IAEA and EURATOM), classification arrangements and security procedures, exports of the technology and Enriched Uranium Product (EUP), and other non-proliferation issues. In this respect the Joint Committee also considers issues connected with any changes in URENCO’s ownership and transfers of technology. URENCO’s Executive Management meets with the Joint Committee on a periodic basis.

In order to permit the completion (in 2006) of the joint venture with Areva regarding the Group’s technology business Enrichment Technology Company (ETC), France needed to adhere to the principles of the Treaty of Almelo, through a new treaty (the Treaty of Cardiff) which was signed on 12 July 2005. A further requirement for completion of the transaction was to obtain European Commission competition clearance. This was granted on 1 July 2006. The terms of the clearance require certain commitments from URENCO and Areva to ensure that URENCO and Areva remain competitors in the field of enrichment and that no commercially sensitive information passes between URENCO and Areva by virtue of their being joint Shareholders of ETC.

Additionally, there is a treaty in place between Germany, the Netherlands, the United Kingdom and the United States of America (the Treaty of Washington, signed on 24 July 1992) which was required in order to permit the establishment of URENCO’s fourth enrichment plant which is currently under construction in New Mexico.